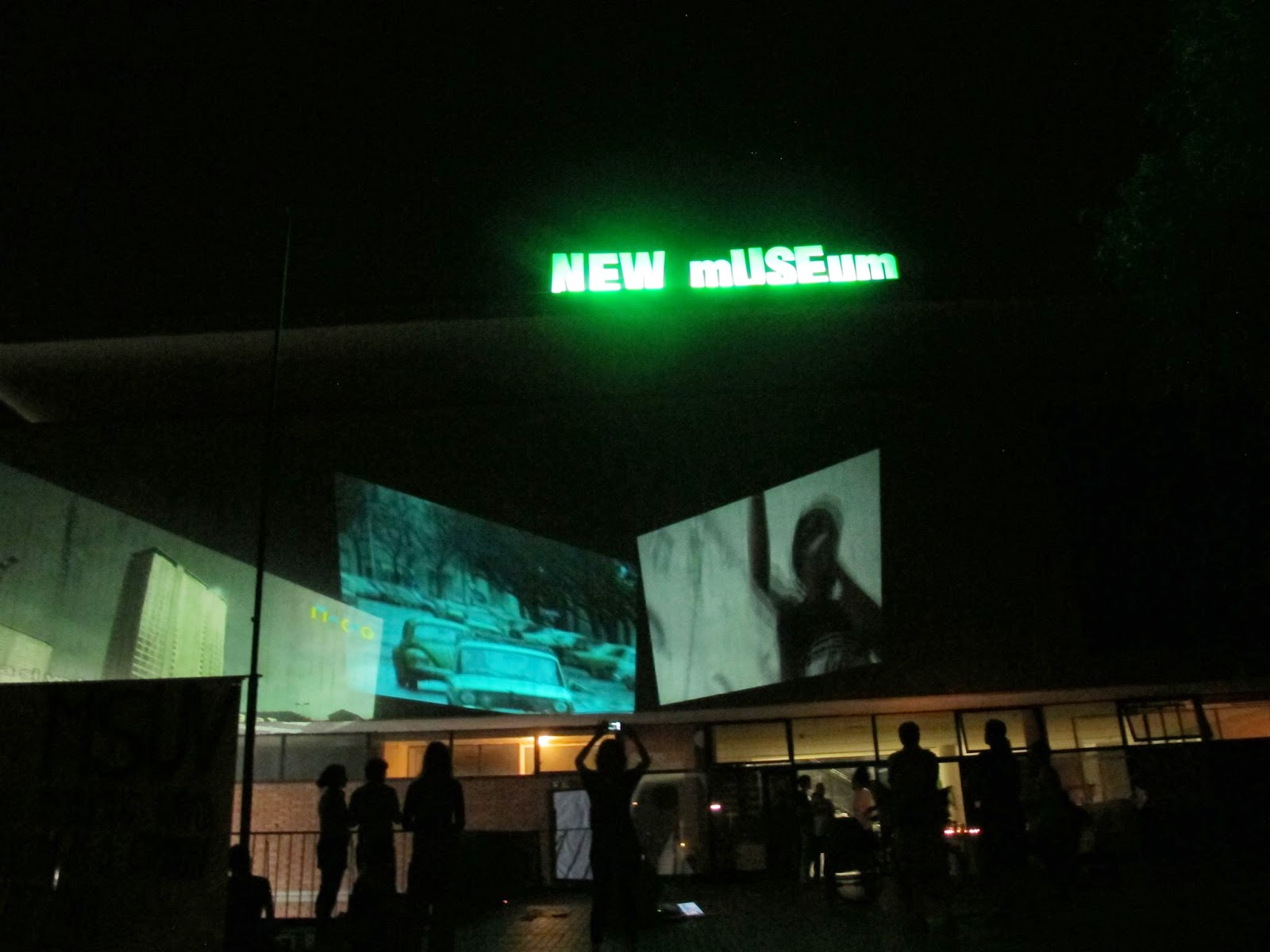 FACK MSUV / performing the museum as a common

FACK MSUV event is taking place at the Museum of Contemporary Art of Vojvodina (MSUV) in Novi Sad (Serbia), from June 30 to July 06, 2014 (and maybe longer).

The event is launched by the mobile art platform F.A.C.K. from Cesena (Italy) in collaboration with “liberated spaces” MACAO (Milan), Teatro Valle (Rome), SALE.Docks (Venice) and Embros Theatre (Athens) and is realized with the contribution and participation of numerous artists, curators, researchers, activist and citizens from the ex-Yu region and the rest of Europe.

What the FACK MSUV is...liberated space/time / FACK MSUV is an operation of temporary “liberation” of the museum (it can be conceived too as a sui generis occupation or re-appropriation) with the aim of making it open and freely accessible for use for both local and international (art) community without classical institutional filtering and control “from the top down”. The MSUV management is a party to the plan insofar as they put at participants’ disposal the museum infrastructure, and even the small portion of it’s (rather modest) program budget, without however being given in return any written project, list of participants or programme of the event. Without precise insight of what-who-how is going actually to happen – and without having in hand any written contract with the participants - the management had de facto renounced, even if only temporarily, to it’s centralised functions of planning, organising, staffing, controlling and directing.

museum as a common / besides being critical of the way the public cultural institutions are conceived, organised and managed – reflecting the dominant social model which is representative, selective, exclusive and mostly exploitative – the FACK MSUV operation is an experiment in alternative “bottom-up” institutional model based on participation, self-organization, self-management, inclusivity and cooperation between artists, curators, scholars and attentive publics/citizens.

the coming art(ist) / in addition to being an occasion to perform collectively the museum as a common, FACK MSUV opens up the space for more specific, and more critical, reflection on what kind of art(ist) – and therefore on what kind of art education and art institution - do we need in today’s globalised and ever more liqufied and precarious society regulated by the economical and financial interests of the very few.

art and revolution / another important focus of the operation is to question the non-relation of the new post-Yugoslav societies and their cultural institutions with the heritage/values of the socialist revolution and the antifascist struggle in the WWII. In particular the MSUV’s non-relation with the (hi)story of the very building in which it is “temporarily” situated since 2001 (and with the building’s sole remaining original exposition room, which was recently contextualized in  nationalistic key by the historical Museum of Vojvodina) - the building was actually constructed for the Museum of revolution (funded in 1956), which fell in oblivion and decay during the Yugoslav conflicts of the 1990s.

social and cultural laboratory / during the FACK MSUV operation will take place, in and out of the museum building, different all-day activities open to public: assemblies, open debates, presentations, workshops, classes, workgroups meetings, performances, projections, site-specific interventions, concerts, cooking, resting, chess and football matches, common meals, etc. The activities will be deployed within the tripartire scheme: the “workshop” dimension - the “strike” dimension – the “fête” dimension. The intention is to transform the museum from the solely representational/exhibition space into an open laboratory for social and cultural experimentation in which ideas and practices can be horizontaly exchanged, developed and shared in the atmosphere of mutuality and solidarity. Therefore it is warmly recommended that the participants plan their permanence during the whole week of the event.

thematic clusters/(in)disciplinary workgroups / following thematic clusters will be confronted during the event, day by day, in informal open format seminars: re-designing the museum/museum as laboratory; un-making publics; practicing multitude/new institutions of common, right to the city/culture; art and migrations/transbordering  practices; European web of liberated time-spaces; de-schooling practicies/alternative (to) art education; new (cultural) economies/alternative currencies; art workers social status/new class (precariat) conscience; the coming art(ist)/artivism for the XXI century; contemporary art: a concept, a system, a market/exit from or reapropriation of the contemporary; cultural boycott/ArtLeaks; (new) autonomy of art;...(themes can be rearranged, changed, others can be added).
All activities will be coordinated by different workgroups, some of which are already active while others are to be formed in place: architecture/urbanisam; theatre/dance/performance; film/video; sound/music; visual arts; cooking (for) art; theory/philosophy; communication/programming; unclassified stuff, etc. One can ether join one (or more) of the workgroups, or create one’s own, or do the both. Different workgroups can collaborate, merge, transform in new ones, collapse...

equality of intelligences / FACK MSUV is a collaborative event co-created, co-curated, co-organised, co-produced, co-directed, co-performed and co-signed (with the credits in alphabetical order) by ALL participants and partnering organisations. Each one contributes to the event in different ways – investing her/his work, time, knowledge, skills, services, materials, equipment, etc - according to his/her own wishes and possibilities. Every participant makes equal use of the available infrastructure and resources in cooperation and in agreement with the others. The call for participation is open to ALL interested individuals/groups – no one is doing centralised selection of the participants, each one is rather selecting oneself for the event taking in consideration its terms and scopes and taking full responsibility for one’s own doings. Everyone is free to involve other persons into the operation, thus extending the chain of mutual trust and confidence based on the postulate of equality of intelligences.

practicalities / the rather modest budget on disposition will be partly used to organise the accommodation, for those coming from abroad (and out of Novi Sad), and partly for the common meals in the museum. The MSUV, besides the building, put at the disposal part of it’s technical equipment and some services (some equipment/services will be provided by other local partners). However it is warmly recommended that the participants bring, as much as possible, their own equipment/materials (sleeping bags included).

For further information and to join the operation send an e-mail to: fackmsuv@gmail.com. Every participant will be provided with username/password for access to the organisational platform: http://fackmsuv.blogspot.com/.
Or simply come in person on Monday 30. june, at 12.00 CET,  for the opening assembly (or on any other day during the period of “liberaton”).

F.A.C.K. is an open mobile indisciplinary collaborative transient (con)temporary platform/event, launched in 2012 in Cesena (Italy), for experimentation and research in alternative bottom-up organizational and production models for arts and culture. Self-menaged by indipendent artists, curators, researchers and technicians FACK questions, in practice and in theory, the dominant (art) system and its institutions, as well as the function of art and the role of artist within our liquid society striked by a profound structural crisis.

* Please note that the present call is an open document-in-progress, continuously collectively reworked and developed (in Italian, Serbo-Croatian and English). It is an invitation to participate both in the conceptualization and realization of the FACK MSUV operation, therefore all comments and suggestions are welcome.
Posted by F.A.C.K. festival at 13:01